Starting on the front row from 4th was always going to be a struggle to get into turn 1 with the lead, but add to that Wayne’s poor start and he was sitting in 8th position on lap 1. Wayne clawed his way back to 5th position and then suffered arm pump which made it very difficult to hang onto that position. Wayne finished the race in 5th position with the second fastest time of the race and also clawed back one point towards the championship lead.

Wayne got a better start and only lost one position at the end of the first lap, it was a dicing match mid way in the race with a few riders of which Wayne managed to break them with 3 laps remaining. He managed to finish 4th in the race after experiencing braking issues.

Wayne said: “Today was a bit of a struggle which wasn’t expected, I got arm pump in the races and just felt that I had to make the best of a bad situation. Sunday we will make some changes to brakes which will hopefully see me be a lot more competitive and stay in the championship hunt for 2015”

You can watch the live streaming on Sunday from 9.45am via http://www.waynemaxwell.com.au/news/150-watch-australasian-superbike-championship-live-on-16-8-15 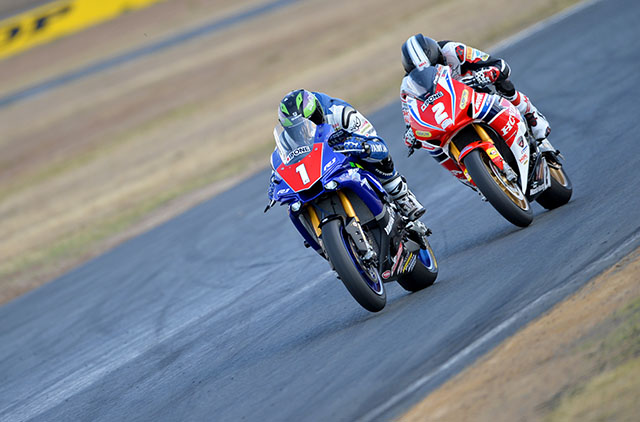 Wayne on the front row after Friday Qualifying

It’s the halfway point of the Australasian Superbike Championship, Wayne heads to Queensland Raceway with all the racing action starting on Saturday 15th August. Live streaming is available on Sunday via www.waynemaxwell.com.au.

After the successful Queensland Raceway testing late last month, Wayne heads to this round with intensions of closing the championship lead. Wayne currently sits second in both championships just 8 points off the lead in both.

After some minor bike adjustments in practice we had a good consistent pace, leading two of the four practice sessions was encouraging in preparation for the 16 minute qualifying.

In qualifying the pace was fast as everyone tries to put down a quick lap early to conserve the tyre use, qualifying tyres are allowed to be used in any race over the weekend so it’s important that we don’t put many laps on them. Wayne completed qualifying in 4th position on the front row putting in the least amount of laps than any other rider and was only .300 off pole position.

Wayne said: “I have a good bike and pace for the 2 x 16 lap race conditions. My tyre grip was really good after five laps which puts me in good stead for the races. It’s going to be important to get a good start with the top eight less than a second apart, we have made a few changes that will hopefully see me get out of the blocks a lot better than the previous round.”

You can watch all the live timing of today’s event via www.computime.com.au or watch the live streaming on Sunday via www.waynemaxwell.com.au. 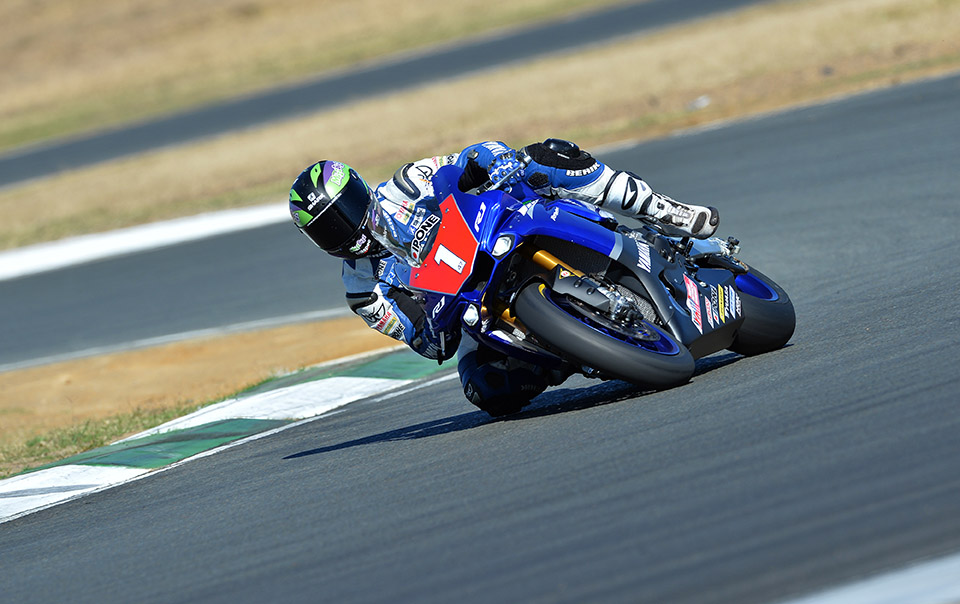 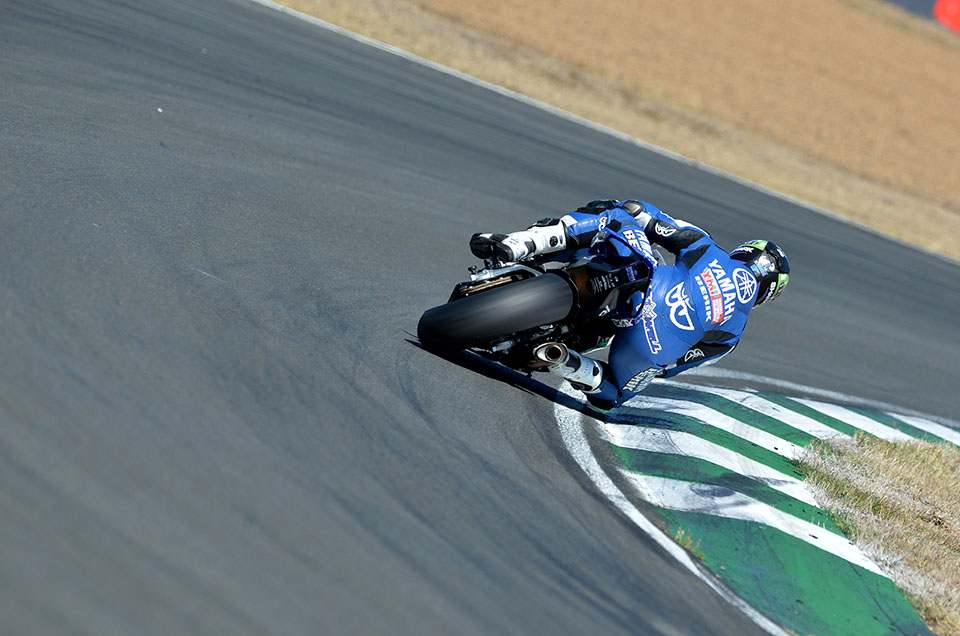 Wayne is sitting 2nd in the championship and heads to Queensland after some good testing in late July.
Watch all the action live Sunday from 9.10am.

Details
21 May
Written by Wayne Maxwell

YRT’s Wayne Maxwell stood on top of the podium after winning round two of the Australasian Superbike Championship, held at the Mallala circuit, in South Australia.

In a weekend of close and intense racing, it was Maxwell that came out on top, giving the all new Yamaha R1 its first major round win on Australian soil and boosting the confidence of the entire YRT outfit.

Maxwell claimed the round win on the day but not without spirited competition from his rivals all weekend. His race results of 1-4-2 were a combination of impressive race speed and common sense race craft and were enough to give him the round win by four points over Jamie Stauffer.

Race one saw Maxwell in a fierce battle at the front of the field with Troy Herfoss which wasn’t settled until the closing stages when Herfoss ran wide in a turn and allowed Maxwell to ride comfortably to victory. Race two and Maxwell played it smart, settled into a comfortable fourth place before rebounding strongly in the final leg to challenge for the lead in the early going before going on to finish second and take the round win.

“It was a good weekend and I’m stoked with the results we achieved. I felt pretty good right from the start of the weekend and had a good day on Saturday so I was confident that we could make a good go of it on Sunday,” Maxwell explains.

“With each ride of the new bike we gain a little bit of knowledge and comfort and I still feel there is room for improvement. The team has worked hard to get it to this level and to think this is only its second event and we have already had some success.

“Thank you to everyone in the YRT crew and hopefully this is the start of a very successful period with the new R1,” he ends.

Glenn Allerton also showed plenty of speed over the weekend and was in the hunt for a podium position despite taking a heavy fall during the Friday practice sessions. Allerton kicked off the day in good fashion taking second behind Maxwell, making it a Yamaha 1-2, but an eighth in race two damaged those podium aspirations. To his credit, he redeemed himself immediately with a third place in race three and his 2-8-3 results left him in fourth place and just shy of a round podium.

Allerton holds down third in the championship after two rounds.

“I’m happy with race one and race three, it was only race two that let me down. We were on a bit of a different tyre strategy to the other teams and I wasn’t able to generate the speed and comfort required with our used tyres but once we put the newer ones on for the final race, we were instantly back up to speed.

“But, like I feel like we are making progress and the race wins aren’t far away,” Allerton said.

Cru Halliday had a rare off weekend by his usual lofty standards and finished the day in seventh place. Halliday has proven to be a potential race winner over the past two seasons but he couldn’t quite find his mojo on the weekend and had to settle for 7-5-7 results. Halliday was forced to deal with every riders’ nightmare, arm pump, and beyond the half way point of each race, it was more a matter of survival than racing at 100%.

Despite the tough weekend, Halliday still sits in fourth place in the championship.

“It wasn’t one of my better weekends, that’s for sure. I just couldn’t get it going all weekend and struggled with arm pump all weekend. I have never had issues with my arms as bad as this before, so I’m not really sure what caused it. I think I will quickly put this one behind me and make sure I get back amongst it at the next round,” Halliday said.

“The weekend was good in general,” states Team Manager, John Redding. “Everyone has been working hard and to get some success at Mallala was a good reward for the team and the riders. We seem to be making ground each time on the bike and with a bike like the new R1, the potential is almost endless.

“I’m sure everyone will continue to keep at it and after two rounds, all three riders are well placed in the championship,” Redding signs off.

Round three of the Australasian Superbike Championship returns to Sydney Motorsport Park on June 26-28. For more information, www.fxsuperbikes.com.au