Phillip Island turned on the weather for the 2014 Moto GP 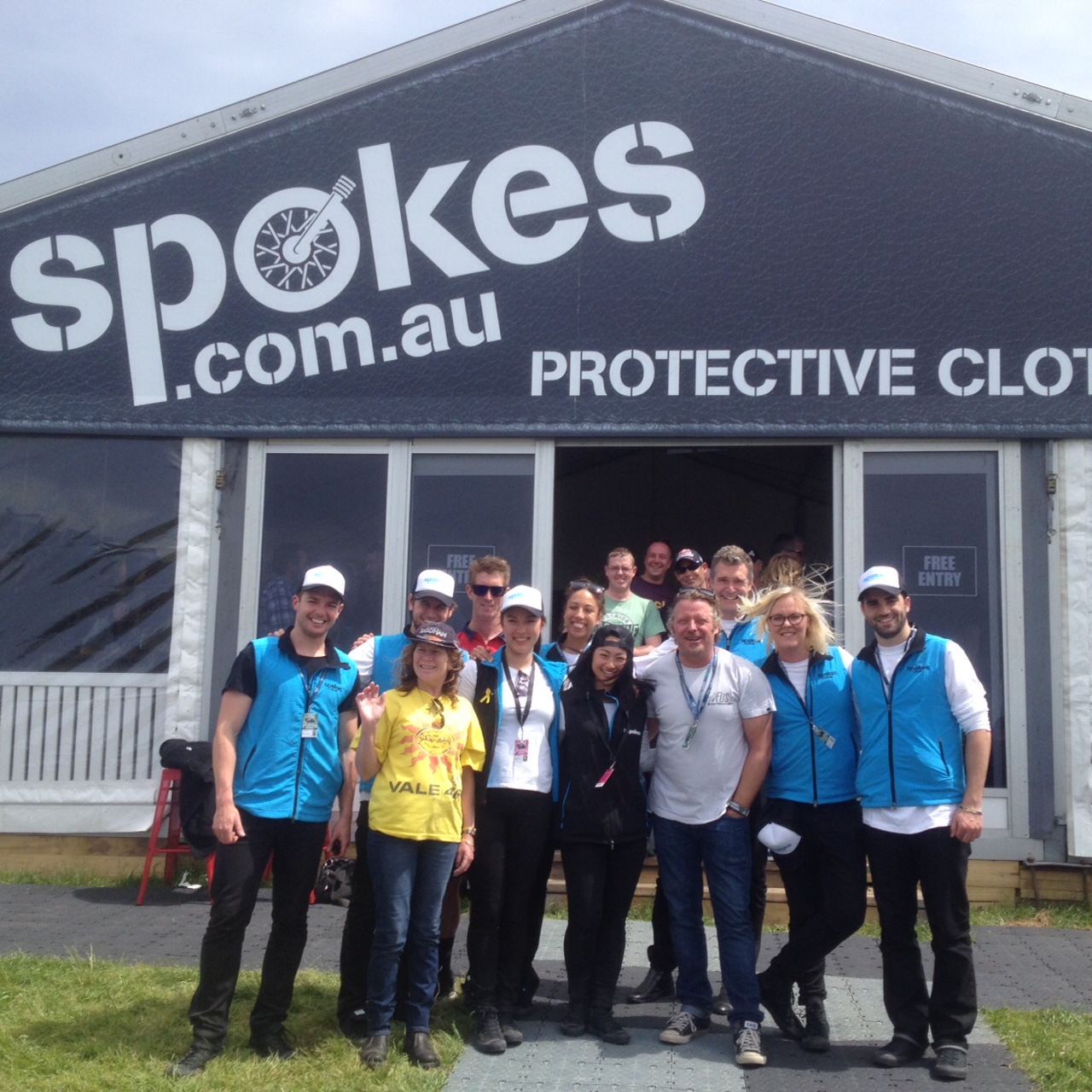 Phillip Island turned on the weather for the 2014 Moto GP, It started off with young Aussie Jack Miller winning a thrilling Moto 3 race in front of his home crowd. There were many attractions to see but the highlight for me was the Spokes Protective Clothing Lounge, it was a great spot for the riders to grab some lunch and refreshments as well as watch the race. Throughout the day there was guest appearances from the well travelled Charley Boorman on how to keep safe when heading off on a trip.

It was great to see so many riders wearing full protective gear whilst out and about enjoying thier motorcycles at such a major event, I hope everyone enjoyed race day as much as I did and remember for further information on riding safely go to https://www.spokes.com.au and check out there Perfect rider videos.

MotoGP is amost upon us, some things to consider when heading down to this great event! 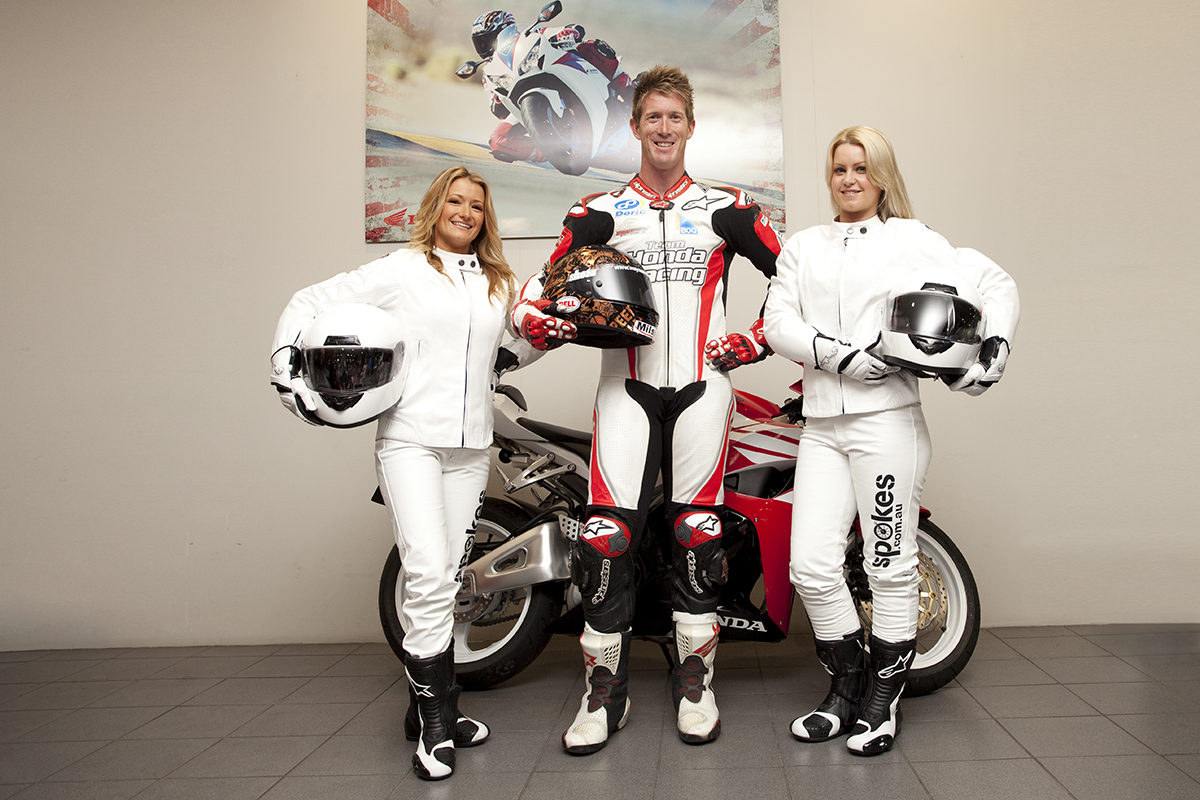 Moto GP is the biggest events on the Australian motorcycling calendar, whether you are Marc Marquez or an everyday rider making the trip south to watch the best motorcycle racers in the world strut their stuff you need to hit the road with a plan. With riders traveling from as far as Western Australia and as close as Melbourne it is important to consider a few things

Team Honda Racing's #47 Wayne Maxwell increased his championship lead yet again today at Round 5 of the Australasian Superbike Championship and the Honda team maintains the top 3 positions on the leaderboard after a fantastic weekend of racing. The Honda CBR1000RR SP shone brightest in the final Superbike race today with a Honda 1-2-3-4 finish.

Not everything went the way of the Honda today with #17 Troy Herfoss lucky to escape injury during a spectacular crash in Race 1 which cost him not only the race lead, but valuable points in the championship. Herfoss still managed to record the fastest lap of Race 1; 58.188 sec and regrouped well to take the next 2 race wins and set a new Superbike lap record in Race 3, a 58.025 sec on lap 7.

Herfoss finished 5th overall for the weekend and retains 3rd place in the ASC championship heading into the Finale. "It was a mixed weekend for me. It's really difficult to accept crashing out of the lead in Race 1, but on the other hand it is hard not to be stoked with two wins and a lap record. The whole team worked so hard to put me on the track for Race 2. It's a real credit to them for me to be out there on a race-winning motorcycle after such an enormous crash. The championship title is out of reach for me now so I will just focus on being up the front at the final event at Sydney Motorsport Park."

The Race 1 winner, Wayne Maxwell was unchallenged once assuming the lead and crossed the finish line ahead of team mate #27 Jamie Stauffer with #16 Josh Hook taking 4th place.

Race 2 was not without drama for some; the race being red flagged and raced in 2 parts. The outcome for Team Honda Racing was Troy Herfoss taking the win and once again recording the fastest lap time of the race; 58.166 sec, just .026 sec ahead of Wayne Maxwell in combined times. Jamie Stauffer finished 3rd in Race 2 with Josh Hook taking 6th place.

The final race of the day for Superbikes was without a doubt the most thrilling. It was a true Battle Royale the entire race length with all 4 Honda CBR1000RR SPs vying for position. The red rivalry began with Stauffer taking the lead, followed by Maxwell, Herfoss and Hook. It was pass or be passed as the awesome foursome exchanged positions throughout. The only constant was the dominance of the Honda in Race 3 and at the finish line it was Troy Herfoss 1st with a new lap record for Superbikes, Wayne Maxwell 2nd, Jamie Stauffer 3rd and Josh Hook 4th to round out the Red Race.

Maxwell took the overall win for Round 5 onboard his Motul Honda and is very happy to maintain his championship lead. "If someone had said 3 weeks ago when I had my shoulder plated that I would get this result I would have had a difficult time believing them. I am super happy to take the round win and extend my championship lead. A huge thanks to the team and I am really looking forward to the Finale at Sydney Motorsport Park in November."

A solid performance from Jamie Stauffer saw the Newcastle rider take a 2nd and two 3rd places today which not only placed him 2nd overall for the event, but also means he too maintains his championship position heading into the final event of the season. "The weekend went pretty well for me although obviously I wanted to come away with the win. Still, my lap times were really consistent and I am still sitting in 2nd place in the championship for the final round so we'll see what happens. The racing was very close today and it's great to see Team Honda Racing so strong. I'm sure we can take it to the final event and finish a great season on a high."

Josh Hook is also looking to the Finale to finish his season with a maximum points haul. Behind the eight ball this year having missed the first event due to injury, Hook has accrued solid points throughout the year and is placed 6th overall heading into the final event. Hook took 4th overall for Round 5 and is focused on race wins at the last event. "It was a hard weekend for us, we struggled with bike set-up a bit, but by the end of the weekend we much stronger. A huge thanks to my crew, Shaun Clarke and Glenn Granger and to the team. I feel we have a good direction heading into the final round and hopefully I will be racing at the front to finish the season."

The final round of the Australasian Superbike Championship will be held at Sydney Motorsport Park 21st – 23rd November when Team Honda Racing will make a final charge for the ASC title.

Current ASC leader could exit Honda at the close of this season.

After being dumped by Honda at the end of 2012, Maxwell won the 2013 Australian Superbike Championship (ASBK) for Team Suzuki, before reuniting in a Motul-backed sub-division of Team Honda Racing in the ASC for 2014 when Suzuki exited the sport.

Prior to securing a seat with Honda domestically for this season, Maxwell landed a plum ride in the Endurance World Championship with the Monster Energy Yamaha Austria Racing Team (YART), which could lead to a fulltime berth aboard a YZF-R1 in 2015 both locally and abroad.

Maxwell, 31, has made no secret that he’s yet to enter negotiations with Honda for next year; instead setting up a shock switch to Yamaha upon arrival of a hotly-anticipated R1. Such a move would be one of the biggest in the sport’s history if he manages to clinch both the ASC and Saturday-run Australian FX-Superbike crowns at Sydney Motorsport Park in November.

“I really want to continue racing overseas in World Endurance and Yamaha is a good option there,” Maxwell revealed to CycleOnline.com.au. “I want to be on the same manufacturer in Australia and Europe next year – that’s something I’ll be looking at and I have spoken to Yamaha about that. I’d like to think they will take me into consideration and I can see myself fitting in at their team. Hopefully they can see the same and we can come up with a deal.”

Maxwell has been in phenomenal form to date in 2014 since returning aboard the CBR1000RR – in the SP variant this year – but doesn’t expect to be retained if Team Honda Racing does downsize from its current four-rider structure as per ongoing paddock speculation suggests.

“If Honda races I would also like to think they would consider me as an option, but they haven’t spoken to me yet and it appears they’ve spoken to some other guys in the team,” he added. “It would be Honda’s loss if they don’t want to take me on.

“They got rid of me at the end of 2012 because they didn’t think I could do the job, so to win the ASBK championship last year for Suzuki and to be leading both championships this year back with Honda, I would like to think they could reconsider their point.”

Coming off the back of two successive round wins despite ongoing recover from injury, Maxwell is at the centre of the local silly season, with Yamaha or Honda yet to determine their 2015 racing programs – either the series they will contest or rider line-ups.